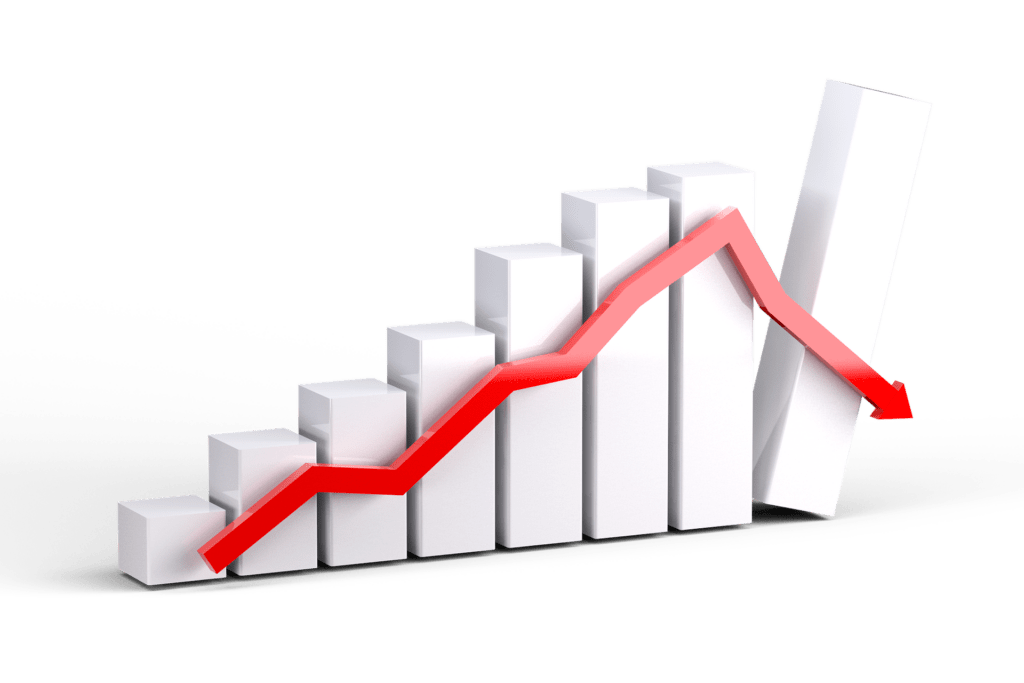 Earnings releases came out from both AT&T (T) and Verizon (VZ).  The release for AT&T (T) was highly anticipated, after the spin-off of WarnerMedia with Discovery.  In addition, both earnings statements would show insight into the inflation and recession concerns from consumers.

After earnings were released, both dividend stocks plummeted to lows we have not seen in a very long time.  The question is, was the stock price decline overblown or should we avoid these two stocks?  Let’s take a look.

We all know the history of AT&T (T) stock.  AT&T once traded into the $40’s, as they loaded on debt to acquire DirectTv and build out Warner Media – i.e. streaming, content, you name it.  The debt created barriers to being fluid and compressed cash flow and growth opportunities.  The new management regime at AT&T (T) took note and decided to shed the fat.

First – AT&T shed off DirecTV to a private equity firm.

Second – AT&T then finalized their spinoff of WarnerMedia into WarnerMediaDiscover (WBD).

With both deals completed, AT&T has shed $10’s of billions of dollars of debt.  Their main focus now is 5G and Fiber connections into households and businesses.

However, AT&T recently released their earnings this past week.  Doom and gloom set the stage, primarily based on cash flow.  In fact, AT&T re-forecasted their free cash flow and it declined

Free cash flow is now in the $14 billion range, down from $16 billion.  On the flip side, revenue is expected to be higher than forecast.  Nonetheless, investors are taking note.  In addition, there is insight to consumer behavior, as AT&T stated there was an impact of $1b on cash flow due to timing of collections.  This could be a sign of the struggling US economy, as customers are finding it more difficult to pay their bill – either paying late or not at all.  Recession?  Inflation pressure?  Here is the stock over the last 5 days – look at that steep cliff down: 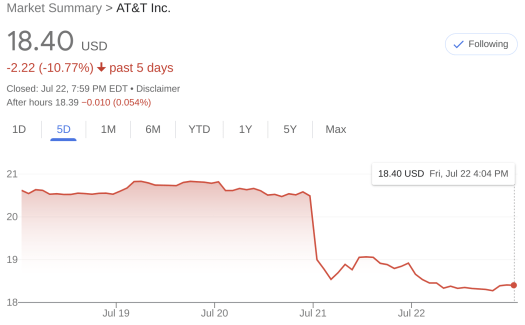 Therefore, AT&T stock is down 10% the last 5 days, dropping like a ton of bricks.  Did Verizon also see the same struggles down?  AT&T now yields, again, over 6%, with a low price to earnings ratio and a relatively safe payout ratio at 44%, right in the sweet spot.

Verizon (VZ) or Big Red, is another massive telecommunications giant in the U.S..  In fact, I was acquiring shares left and right of Verizon throughout last year.  In fact, Warren Buffett was also buying billions on billions of Verizon stock.

However, in Q1, Warren halved his stake in Verizon:

In addition, Verizon was the absolute leader in the 5G Spectrum bidding war, committing to well over $45 billion!  They want to be the leader in all things 5G, to stay committed as the fastest and most reliable network there is.  How did their earnings release go for Verizon Stock and their shareholders? 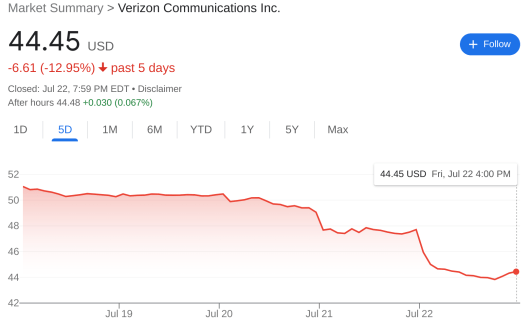 The stock is now down 13% in the last 5 days, another steep cliff, similar to AT&T (T).  What’s interesting – both dividend stocks had different forecast updates – AT&T’s was based on cash flow and Verizon’s was based on earnings.  Both essentially could represent signs of inflation costs that they are incurring and revenue appears to be strong/growing – as both companies are passing on costs to consumers/raising their rates.

Verizon now has a price to earnings in the 8x earning range.  in addition, the dividend is safe with an approximate 50% dividend payout ratio with over 17 years of dividend growth.

As a dividend investor – we have 2 high yielding stocks.  Is this a trap?  Stock price plummet over blown?

Overall, two companies that truly are not going anywhere.  Let’s make sure we are clear on that.  Two of the biggest competitors in the same space – your cell phone carrier and house/business internet needs.  Majority of Americans have one or the other as their phone provided (surprisingly, I do not – I have GoogleFi, paying only $20 per month!).

Both dividends are extremely safe.  One item I question, though, is AT&T – as management based their dividend strictly on their free cash flow.  I highly doubt they would cut their dividend from where it currently is at, so soon, but something to watch as a dividend investor.

Price to earnings are extremely low in this industry.  Therefore, they both appear to be adequately valued at these prices.  The S&P 500 is trading at approximately 20x earnings.

Is the stock price plummet overblown?  Some would argue it’s short term and this time next year, margins and free cash flow should improve after inflation is under control.  If you own either of the 2 companies – I could see an argument for adding a “small” amount to current positions.

What am I doing?  I did end up buying 2 shares of Verizon (VZ) stock at under $45 per share on July 22nd.  This is in addition to all of my other automated investment strategies, such as my $50 per day into Vanguard’s VOO.  I felt it was too low of a price to not at least grab 2 shares under $100 in total.

Therefore, I would argue slightly overblown, but not to go all in at these prices, by any means.  Obviously, not investment advice and definitely conduct your own research!

Let me know in the comments.  Again, appreciate the support, good luck and happy investing!

Arkansas Cannabis Legalization Efforts Reach State Supreme Court: The Board ‘Thwarted The Will Of The People’