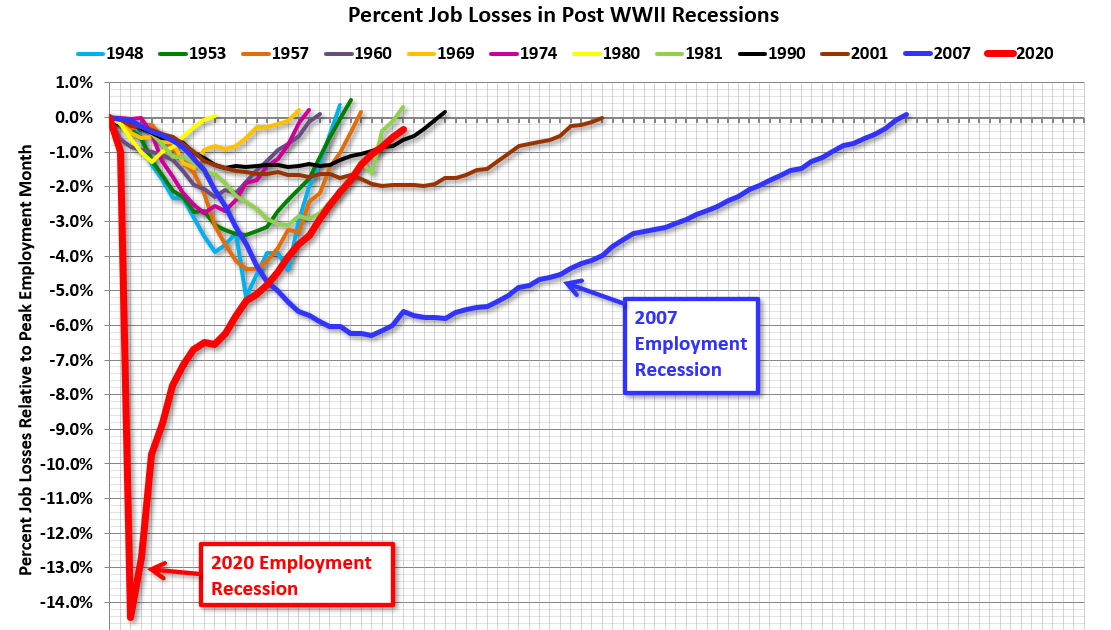 On Friday at 8:30 AM ET, the BLS will release the employment report for July. The consensus is for 250,000 jobs added, and for the unemployment rate to be unchanged at 3.6%.

There were 372,000 jobs added in June, and the unemployment rate was at 3.6%.Click on graph for larger image.

• First, currently there are still about 500 thousand fewer jobs than in February 2020 (the month before the pandemic).

This graph shows the job losses from the start of the employment recession, in percentage terms.

• ADP Report: The ADP employment report has been “paused” and is being retooled.

• ISM Surveys: Note that the ISM services are diffusion indexes based on the number of firms hiring (not the number of hires).  The ISM® manufacturing employment index decreased in July to 49.9%, up from 47.3% last month.   This would suggest about 20,000 jobs lost in manufacturing.

The ISM® services employment index increased in July to 49.1%, up from 47.4% last month.   This would suggest service employment was increased about 50,000 in July.

Combined, the ISM surveys suggest only 30,000 jobs added in July.

• Unemployment Claims: The weekly claims report showed an increase in the number of initial unemployment claims during the reference week (includes the 12th of the month) from 233,000 in June to 261,000 in July. This would usually suggest a few more layoffs in June than in May. In general, weekly claims were above expectations in July.