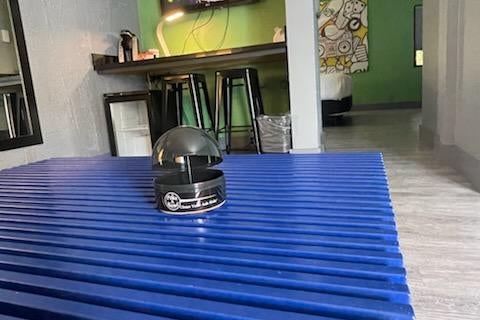 Poke A Bowl has been selected as the cannabis ashtray of choice to be used on-site by guests of the first cannabis-friendly hotel in the state of Arizona.

The upscale Clarendon Hotel, located in downtown Phoenix, has prepared 16 cannabis-friendly rooms, according to Darren Brotherton, the operating partner at the hotel.

“Poke A Bowl is very excited to be a part of the future with such a forward-looking company,” stated actor, co-founder, and company president Creagen Dow. “I believe Darren and his team have put a lot of thought into this venture. They’ve incorporated a cannabis-friendly events company, cannabis-infused meals available on-site by Chef Derek Upton, and of course, selecting the Poke A Bowl ashtray after testing it out for almost a year.

“The Clarendon Hotel designers didn’t want the cannabis designated rooms to retain odor, so they installed high-end air scrubbers and selected accents for the room like Poke A Bowl ashtrays because they have a lid to keep odors and ash contained. Poke A Bowl’s full line of ashtrays will also be available for sale in the gift shop as well as used in the special cannabis-friendly Lounge and Sky Deck, where I’m sure the lid will be much appreciated when there’s a breeze,” he added.