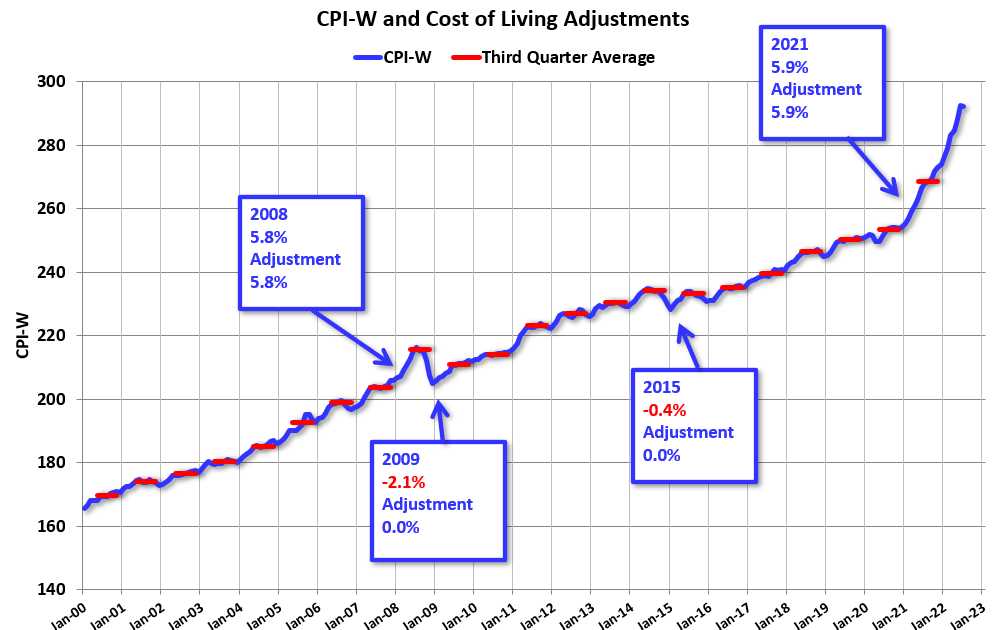 The BLS reported this morning:

The Consumer Price Index for Urban Wage Earners and Clerical Workers (CPI-W) increased 9.1 percent
over the last 12 months to an index level of 292.219 (1982-84=100). For the month, the index
declined 0.1 percent prior to seasonal adjustment.

CPI-W is the index that is used to calculate the Cost-Of-Living Adjustments (COLA). The calculation dates have changed over time (see Cost-of-Living Adjustments), but the current calculation uses the average CPI-W for the three months in Q3 (July, August, September) and compares to the average for the highest previous average of Q3 months. Note: this is not the headline CPI-U and is not seasonally adjusted (NSA).

The 2021 Q3 average was the highest Q3 average, so we only have to compare Q3 this year to last year.

This graph shows CPI-W since January 2000. The red lines are the Q3 average of CPI-W for each year.

Note: The year labeled is for the calculation, and the adjustment is effective for December of that year (received by beneficiaries in January of the following year).

Contribution and Benefit Base

The contribution base will be adjusted using the National Average Wage Index. This is based on a one-year lag. The National Average Wage Index is not available for 2021 yet, but wages probably increased again in 2021. If wages increased 4% in 2021, then the contribution base next year will increase to around $153,000 in 2023, from the current $147,000.

Remember – this is an early look. What matters is average CPI-W, NSA, for all three months in Q3 (July, August and September).