‘House Of The Dragon’ Sets HBO Record: Here’s How It Compares To ‘Game Of Thrones’ And ‘Stranger Things’ 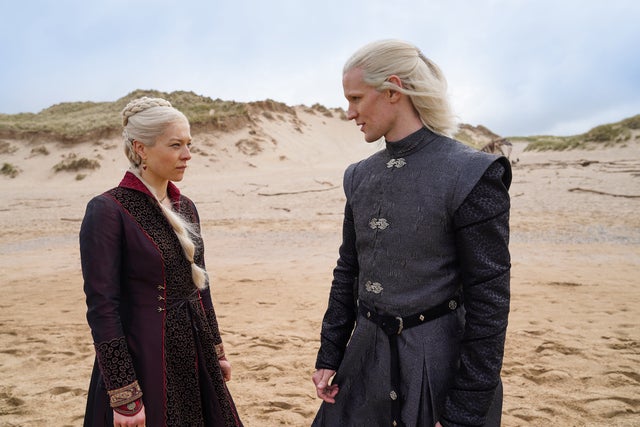 The highly anticipated prequel to the hit series “Game of Thrones” turned in record-setting figures for HBO. Here’s how many people watched the premiere of “House of the Dragon” and how it compared to “Game of Thrones” and other hit shows.

What Happened: Nearly 10 million people watched the premiere episode of “House of the Dragon” Sunday on HBO and HBO Max, both owned by Warner Bros. Discovery WBD.

The figure makes the show the biggest premiere in HBO history and set a record for the best series launch on HBO Max in the U.S., Latin America and EMEA regions, per The Hollywood Reporter.

“It was wonderful to see millions of ‘Game of Thrones’ fans return with us to Westeros last night,” HBO and HBO Max chief content officer Casey Bloys said.

The new series is a prequel to “Game of Thrones,” set 200 years before the events of the original hit HBO show and is one of the two most anticipated new television shows in 2022.

Along with strong viewership, “House of the Dragon” was also a strong trending topic on Twitter Inc TWTR ranking as the top tweeted topic for 14 hours straight according to the company. The show also was the No. 1 trend on Google Trends, as tracked by Alphabet Inc GOOGGOOGL.

The premiere of “House of the Dragon” also led to increased viewership of past seasons of “Game of Thrones” with viewership up seven consecutive weeks on a week-over-week basis. August viewership of the former show is up 90% compared to June.

Benzinga followers on Twitter picked “House of the Dragon” over “The Lord of the Rings: The Rings of Power” from Amazon.com, Inc.’s AMZN Prime Video in a battle of two of the most anticipated shows of 2022.

The HBO Max app crashed for some users due to demand Sunday. HBO spent a reported $100 million in its largest marketing campaign ever tied to the release of “House of the Dragon.”

How House of Dragons Compares: The premiere episode of “House of the Dragon” falls shy of the 19.3 million viewers who tuned into the series finale of “Game of Thrones” in May 2019. The 10 million figure was the highest single night total since February’s season two finale of “Euphoria,” which had 6.6 million viewers.

The total from “House of the Dragon” bests the series debut of “Game of Thrones” in 2011, which had 2.22 million viewers on HBO. Figures from Nielsen Holdings PLC NLSN illustrated the on-air HBO figures for both shows were similar to “House of Dragon,” having 2.17 million viewers on-air and gaining from the massive audience on streaming platform HBO Max.

The Hollywood Reporter made the argument that its hard to compare the two shows on a similar basis given the rise of streaming.

The record set by “House of the Dragon” follows a string of record-breakers for streaming platforms in 2022. The Walt Disney Co DIS streaming platform Disney+ set a record for viewership in May 2022 with the premiere of “Obi-Wan Kenobi” with an undisclosed number of viewers tuning into the first two episodes.

Netflix Inc NFLX had its English-language record for a show broken earlier this year with the fourth season of “Stranger Things.”

The final two episodes of the fourth season saw Netflix post 301.3 million hours watched for the show in the week of the premiere. The first seven episodes had 287 million hours viewed in the first week of its release, breaking a previous English-language record of “Bridgerton” at 193 million hours.

It’s hard to contrast the Netflix show to “House of the Dragon” as Netflix releases seasons in batches of episodes instead of one at a time.

The premiere of “House of the Dragon” would have 60 million hours viewed based on a near hour run time and 10 million viewers. This comes from only one day of viewership, compared to three in most Netflix weekly releases for shows that premiere on Fridays and include multiple episodes.

Photo: Ollie Upton for “House of Dragon” for HBO