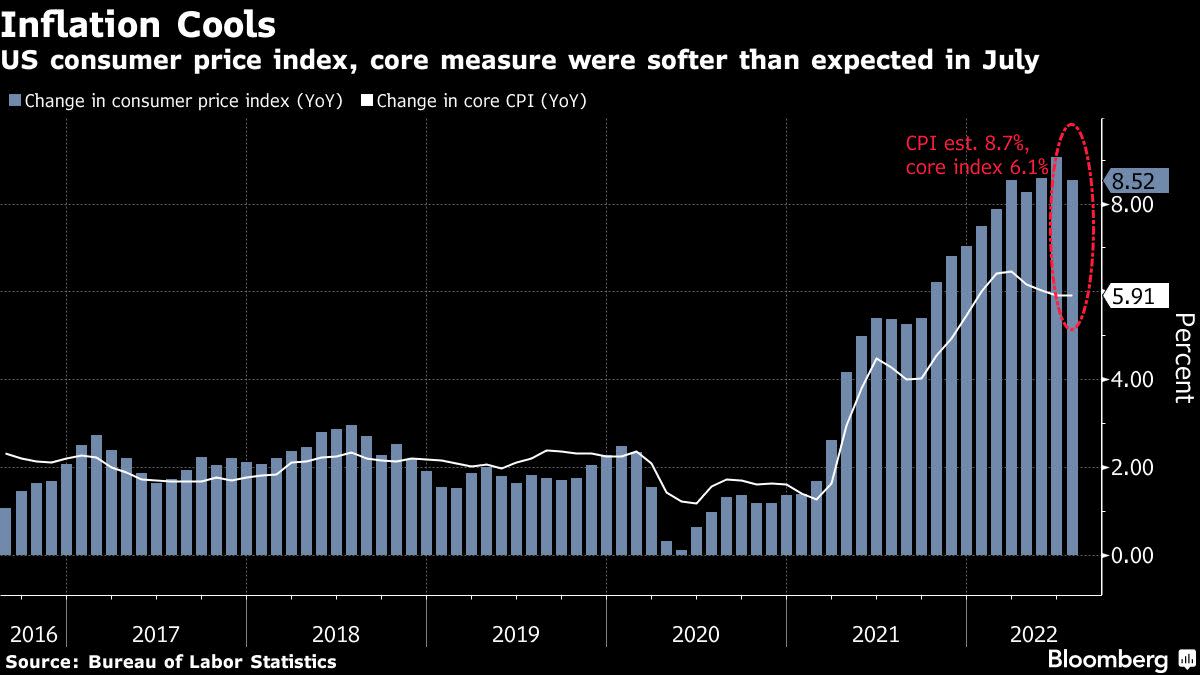 (Bloomberg) — The cooler-than-expected US inflation reading for July is a positive sign that has buoyed risk assets, but some investors may be getting a little ahead of themselves, according to analysts.

The rally that sent the S&P 500 to a three-month high and the Nasdaq 100 more than 20% above its June bottom was fueled by bets that the Federal Reserve may turn less hawkish on interest rate hikes. Yet market observers cautioned that policy makers will want to see months more of evidence that price gains are slowing before they change their view.

Market reaction in Asia remained positive on Thursday, with a key gauge of stocks in the region rallying about 0.7%. Asia’s emerging-market currencies rose, led by South Korean won and the Thai baht.

“The markets reaction is undeniably positive, but we think overdone,” said John Velis, an FX and macro strategist at Bank of New York Mellon. “We still think the Fed will move rates up close to 4% by the end of the year or beginning of 2023, and that inflation, while decelerating will remain uncomfortably high.”

Here are some comments on what’s next for markets:

“The CPI release does not indicate a pivot to dovishness for the Fed. It reduces the risk that dramatic moves such as raising the target rate by 100bps in September or an inter-meeting hike will be needed,” Sarah Hewin and Steve Englander, at Standard Chartered Bank, wrote in a note. “We expect that by Q4-2022 the evidence of economic slowing will be enough to lead to a pause, but the now-priced-in 2023 policy rate cuts will become a policy-rate plateau.”

“VIX is trading below 20 for the first time since April and VIX term structure has steepened to the highest levels since April,” said Chris Murphy, derivatives strategist at Susquehanna International Group. “Lower volatility levels could open the door for more equity buying from the vol targeting community.”

“Are we really at peak inflation and peak hawkishness from the Fed?” wrote Saira Malik, chief investment officer at Nuveen. “While market odds of a third consecutive 75 basis points rate hike at the Fed’s September meeting fell dramatically after today’s CPI print, we doubt the Fed will be deterred from continuing its already-aggressive tightening path based on a single CPI report.”

US large caps, with a bias toward high-quality growth companies, are among Malik’s favored stocks as well as select energy names and firms increasing their dividends. Investors should look beyond the traditional 60/40 equity-fixed income portfolio, using real assets such as farmland as inflation hedges via predictable cash flows and built-in CPI escalators, she said.

The Australian dollar rose overnight post-CPI data release, but it “will likely remain a hostage to the broad USD trends and changes in the world economic outlook,” Carol Kong, strategist at Commonwealth Bank of Australia Ltd., wrote in a note. “Given rising global interest rates and high inflation, market participants are likely to further downgrade the global growth outlook which is a negative for the pro‑cyclical AUD.”

“I think the downward pressure on the AUD will continue as I am still of the view that the Fed will be far more aggressive on rates than the RBA will turn out to be,” said Alex Joiner, chief economist at IFM Investors Pty. “I think volatility will continue through markets as they still struggle to price elevated inflation and a deteriorating economic outlook’

The market got a bit ahead of itself in pricing for the policy rate peaks next year, said Stephen Miller, an investment consultant at GSFM, a unit of Canada’s CI Financial Corp.

“We need to resolve just how sticky inflation is and whether the market’s benign view of that and of the Fed ends up being accurate. Any smooth retreat toward 3% in the space of two years still looks to be a big ask,” he said.

“While this means some relief for the risky Asian assets at the margin, we do think there will be potentially be more hawkish Fed speakers that continue to bring up the market pricing of Fed’s tightening cycle,” said Charu Chanana, a strategist at Saxo Capital Markets Pte in Singapore. “That could potentially limit the euphoria in Asia.”

“The market could run out of positive catalysts after today’s spotlight moment, suggesting the current bear rally is also moving towards its peak,” said Hebe Chen, an analyst at IG Markets Ltd. Plus, once investor expectations settle on a 50-basis-point hike next month, “the pre-set playbook (ie, 75bps) will turn out to be an unwelcomed surprise.”

Meanwhile, traders in the Australian stock market may choose “to stay conservative by the end of this week as we will welcome our job data next week, which is expected to prove that inflation will stay for long,” she said.

(Updates with latest market moves. A previous version of this story was corrected to fix figures in the section on GSFM’s Miller)