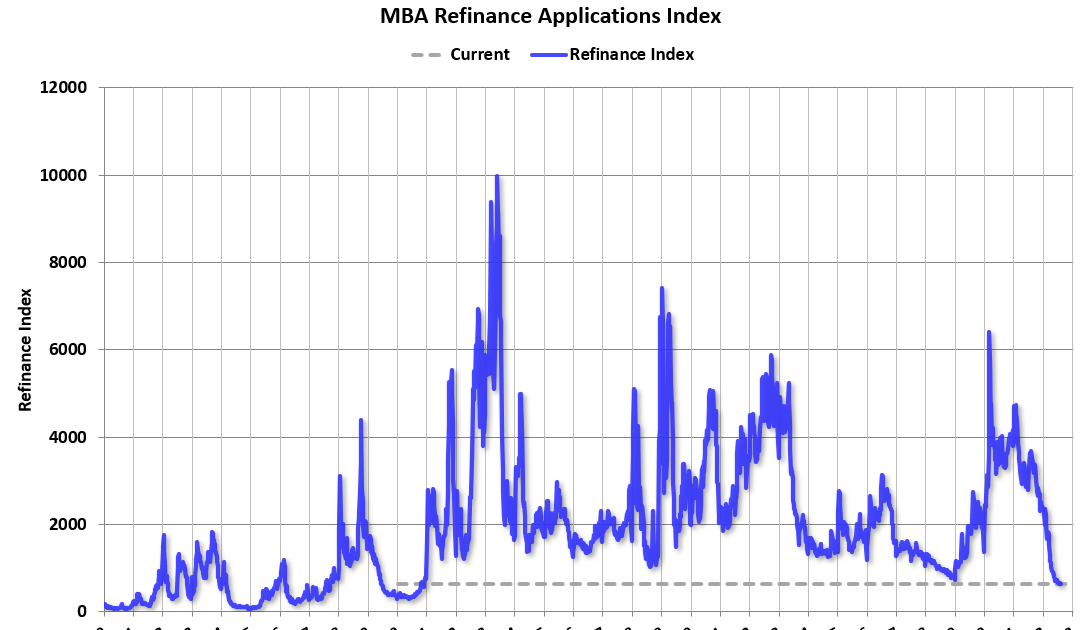 Mortgage applications decreased 2.3 percent from one
week earlier, according to data from the Mortgage Bankers Association’s (MBA) Weekly Mortgage
Applications Survey for the week ending August 12, 2022.

“Mortgage application activity was lower last week, with overall applications declining over two percent to
their lowest level since 2000. Home purchase applications continued to be held down by rapidly drying up
demand, as high mortgage rates, challenging affordability, and a gloomier outlook of the economy kept
buyers on the sidelines,” said Joel Kan, MBA’s Associate Vice President of Economic and Industry
Forecasting. “However, if home price growth slows more significantly and mortgage rates move lower, we
might see some purchase activity return later in the year. The 30-year fixed rate stayed more than two
percentage points higher than a year ago at 5.45 percent but was down over 50 basis points from the
June 2020 high of 5.98 percent, providing some relief for buyers in the market. The refinance index,
however, fell five percent to its lowest level since November 2000, driven by a six percent drop in
conventional refinance applications.”

Added Kan, “Refinance applications increased over three percent but remained more than 80 percent
lower than a year ago in this higher rate environment.”
…
The average contract interest rate for 30-year fixed-rate mortgages with conforming loan balances
($647,200 or less) decreased to 5.45 percent from 5.47 percent, with points decreasing to 0.57 from 0.80
(including the origination fee) for 80 percent loan-to-value ratio (LTV) loans.
emphasis added

The first graph shows the refinance index since 1990.

With higher mortgage rates, the refinance index has declined sharply over the last several months.

The refinance index is at the lowest level since the year 2000. 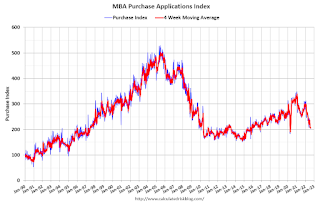 According to the MBA, purchase activity is down 18% year-over-year unadjusted.
The purchase index is now only 12% above the pandemic low.

Note: Red is a four-week average (blue is weekly).