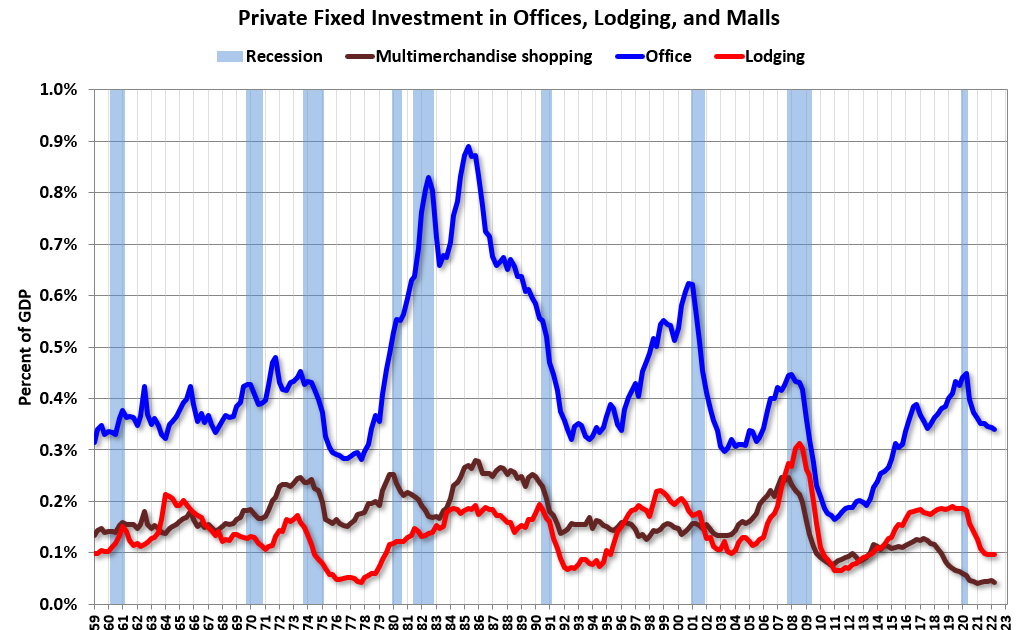 The BEA released the underlying details for the Q2 advance GDP report this morning.

The BEA reported that investment in non-residential structures decreased at a 11.7% annual pace in Q2.

Investment in petroleum and natural gas structures increased in Q2 compared to Q1 and was up 31% year-over-year.

The first graph shows investment in offices, malls and lodging as a percent of GDP.

Investment in offices (blue) increased slightly in Q2 and was up 5.7% year-over-year.  (Still declining as a percent of GDP).

Investment in multimerchandise shopping structures (malls) peaked in 2007 and was up about 10% year-over-year in Q2 – from a very low level.   The vacancy rate for malls is still very high, so investment will probably stay low for some time.

All three sectors – offices, malls, and hotels – were hurt significantly by the pandemic. 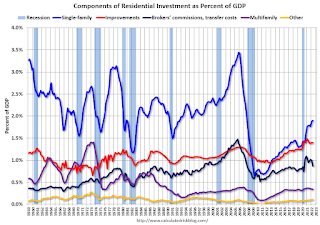 The second graph is for Residential investment components as a percent of GDP. According to the Bureau of Economic Analysis, RI includes new single-family structures, multifamily structures, home improvement, Brokers’ commissions and other ownership transfer costs, and a few minor categories (dormitories, manufactured homes).

Investment in multi-family structures was unchanged in Q2 from Q1.

Investment in home improvement was at a $347 billion Seasonally Adjusted Annual Rate (SAAR) in Q2 (about 1.4% of GDP).  Home improvement spending was strong during the pandemic.