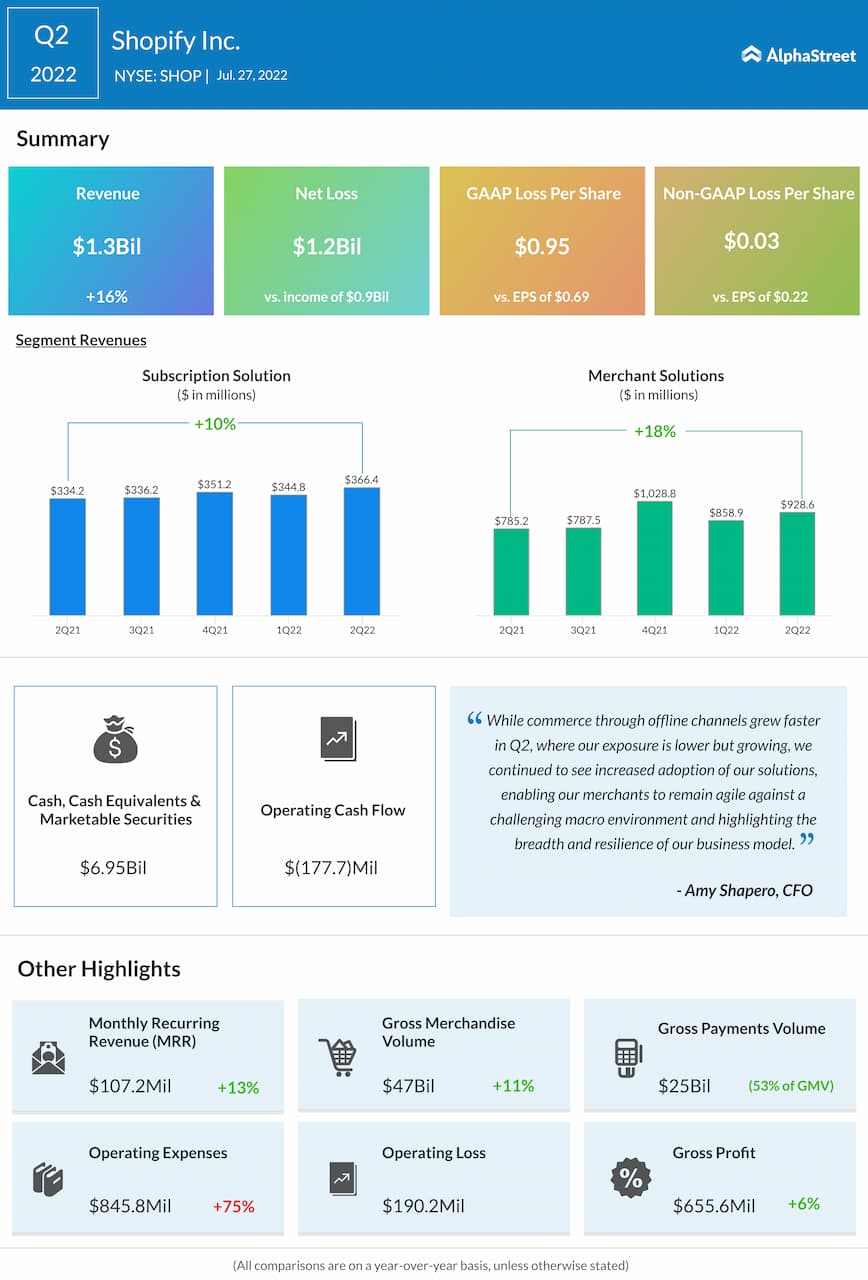 Shares of Shopify Inc. (NYSE: SHOP) were up 11% on Wednesday despite the company missing both revenue and earnings expectations for the second quarter of 2022 and issuing a bleak outlook for the year. The stock has dropped 74% year-to-date.

Shopify’s total revenue in Q2 grew 16% year-over-year to $1.3 billion but missed market estimates. The top line growth was negatively impacted by currency headwinds during the quarter. The company reported adjusted loss of $0.03 per share for Q2 which also fell short of expectations.

Total operating expenses increased 75% YoY during the quarter. The company reported an operating loss of $190 million in Q2 compared to an income of $139 million last year.

Shopify recorded double-digit increases in revenue from its Subscription Solutions and Merchant Solutions segments, as more merchants joined the platform and also due to the solid uptake of merchant solutions such as Shopify Payments and Shopify Capital.

Total Gross Merchandise Volume (GMV) in Q2 was nearly $47 billion, up 11% YoY and higher than the overall US retail growth of about 7%. In the year-ago quarter, GMV growth was 40% driven by consumer spending fueled in turn by stimulus checks.

On its quarterly conference call, Shopify said that persistent inflation dampened online sales globally. As prices continue to escalate rapidly, consumers have been turning to discount retailers and reducing their spend on other goods categories. The company anticipates that inflation and continued softness in consumer spending on goods will persist throughout the remainder of the year.

A day ago, Shopify announced that it was reducing its workforce by around 10% as the strategic bet it placed on ecommerce growth did not pan out as expected. For the remainder of 2022, the company expects to slow hiring to only the most strategic. Shopify completed the acquisition of Deliverr earlier this month and with the addition of this team, the company expects to exit 2022 with only a modest increase in total headcount versus the beginning of the year.

For the remainder of 2022, Shopify expects to reduce spend in low-priority areas and non-core activities that it believes would not be effective in the current environment. On its call, the company said it expects 2022 to be more of a transition year in which e-commerce has largely reset to the pre-COVID trend line and is now pressured by persistent high inflation.

Shopify expects its GMV growth to outperform the broader retail market in the second half of 2022, despite the impacts of inflation. The number of new merchants joining the platform in the latter half of the year will be higher than the first half as its localized subscription pricing and other commercial initiatives gain traction.

Both GMV and total revenue in 2022 are expected to be more evenly distributed across the four quarters similar to 2021. Operating expense growth is expected to decelerate through the third and fourth quarters of 2022.